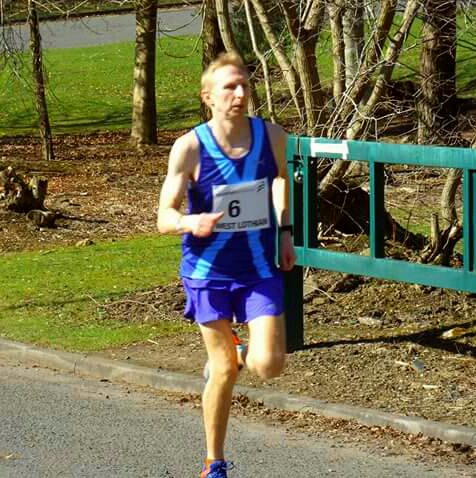 Colin is a National Clinical Lead Physiologist in UK Healthcare, a Sports Scientist, UKA Running Coach/tutor and Personal Trainer tutor/assessor who works with athletes from beginner to elite, all over the world. He has spent time in Kenya with some of the world's top athletes and coaches, training at altitude in their quest to reach the top. He has also worked in hospitals, gyms, clinics and fitness centres all over the UK with the general public, amateur and professional sports people, all with the similar aim of improving performance. As a keen running enthusiast himself he is always looking to trial new ways of pushing the limits of human performance. He is a regular speaker at conferences in the UK and abroad, and his written articles are regularly published in running magazines.

Colin has been a member of Bellahouston Harriers since 2014 and has been head coach at West End Road Runners since their formation in 2016 helping them to win two sports awards so far.

A little bit about me, I joined Bellahouston Harriers in the mid 70’s and after a couple of years training, started to push my way into top squads, competing in cross-country, road racing and track racing. I loved competing on the track, as at that point the club was competing in Division 1 of the Scottish Athletics league.

During my time at Bella, I was fortunate to train with some excellent athletes that were in the club and that helped in my improving as an athlete. I was fortunate enough at the time to be chosen to represent Scotland on the road (marathon) and cross-country and to have been part of the very successful Bella teams of the 80’s, winnings stage road relays and regularly placing at national cross country. I left Bella in the late 80’s to pursue my love of track racing as the club dropped out of the league set up.

I decide to hang up my spike in the mid 90’s and have a wee break for the sport and to recharge my batteries and took up cycling which is still a great passion of mine, firstly on a mountain bike and then moving on the black stuff. Around about the new millennium, I was looking for a new challenge and that’s when the coaching started, as I was lucky enough to be coached and inspired by some of the best around, Frank Dick, used to take sessions in Bellahouston sports centre, as did Alex Naylor and lastly Bill Scally at Shettleston. So as a newly qualified coach, I was keen to get started and I hope you don’t hold this against me, I was the inaugural coach of the Roadrunners and stayed there for a number of years. I continued to do individual stuff with some runners from other clubs, but it wasn’t as fulfilling as working with a club. The opportunity to work on rebuilding Bellahouston Harriers was too difficult to turn down and now my next challenge is trying to get the Junior section permanently established. With the help of Greg Corr-MacLeod, we have been doing well and now we have to kick on and improve and recruit more Juniors and helpers. 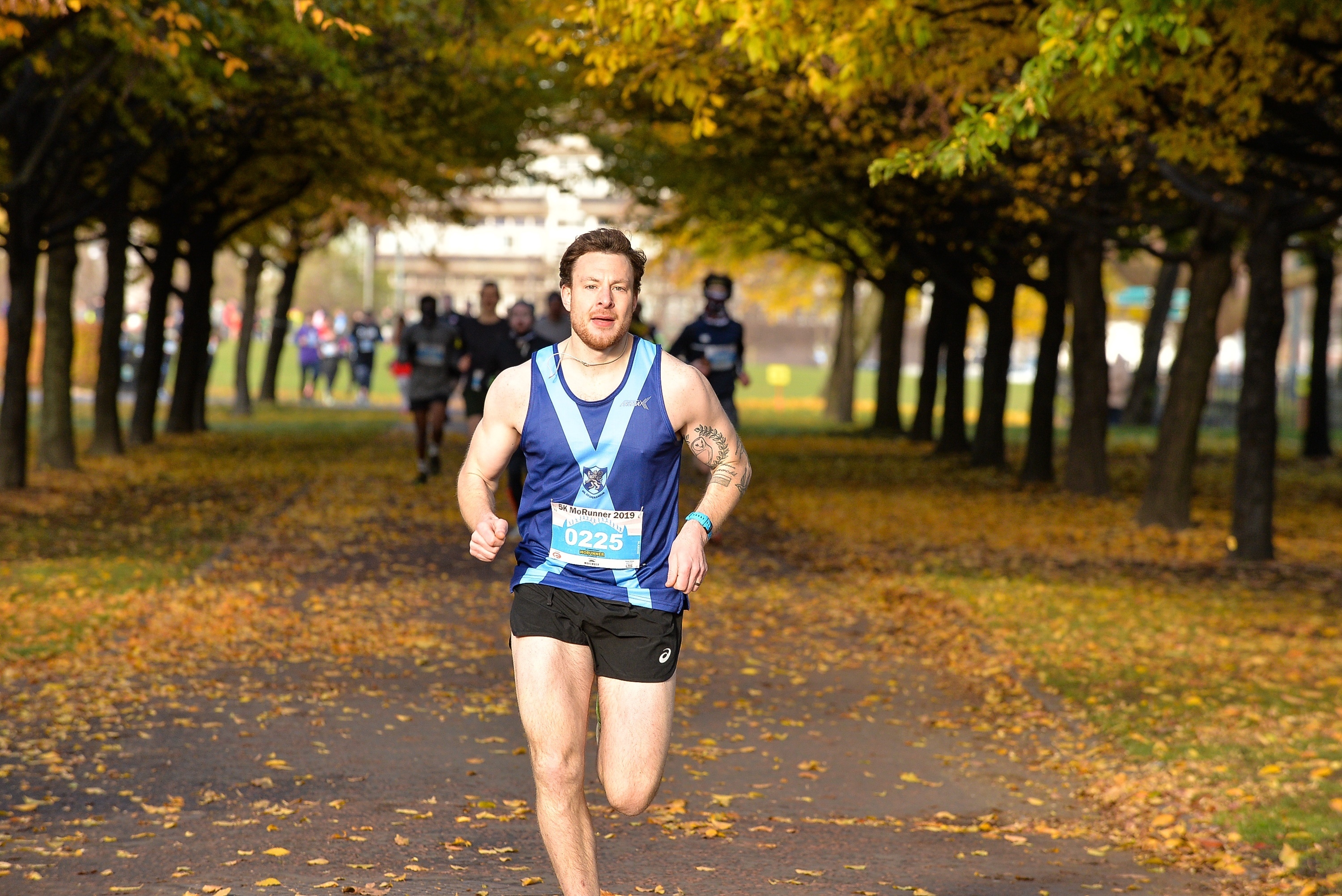 "Happiest on the hills without a watch but also fanatical about progressing and completing new challenges. Favourite race experience has to be Run With The Blades 50k trail race. Managed to achieve the elusive flow state for almost the whole race knocking 30 mins of the previous year and sneaking into the top ten over the line. Also thoroughly enjoyed a baptism of fire during my first cross country season with some of the best (worst!) conditions Balloch and Falkirk have seen in some time. Outside of running I can be found either working as a personal training or enjoying the great outdoors with the family." 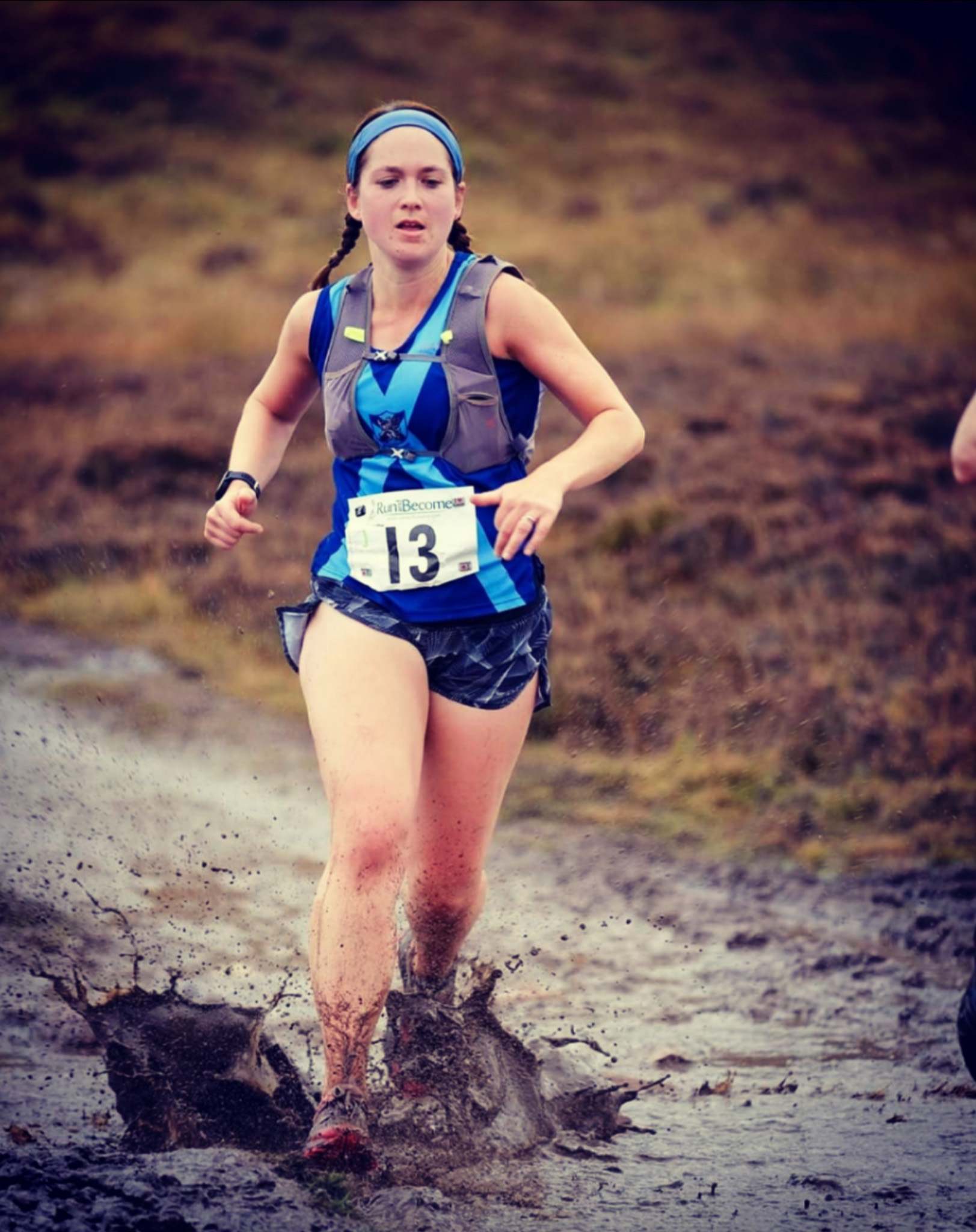 "I've been running with Bellahouston Harriers since 2016 and became a coaching assistant almost two years ago, mainly coaching our sub 22 and sub 24 groups. I have focused more recently on trail and hill running, but still enjoy training for the Scottish Half Marathon each year. I ran in the Alps last summer which was a running highlight for me.
I travel across Scotland for my day job and take the opportunity to race train and race where I can when I visit new places.
During lockdown I've learnt a lot training by myself and look forward to meeting back with the club when the time comes."

“Also known as “The Fat Claw” (haha)”. My favourite running distance is probably the marathon as it is a great test of your fitness and if you dial down the pace that you have worked hard at in training it can be very rewarding at the end. However, saying that, my favourite race I have taken part in is Greenock 5 mile race as it is one of the first road races after cross country. I enjoy having a joke and a carry on with club mates to help keep spirts high but I get serious when it is time to hit a pace during training sessions or on race day. I love to help fellow club mates to reach their best if I can.

Away from running, I work as a joiners hammer hand (labourer) which usually involves loading materials ranging from fire doors to plasterboard. I also fit ceilings and internal walls etc on building sites. My friends tell me I am too laid back for my own good." 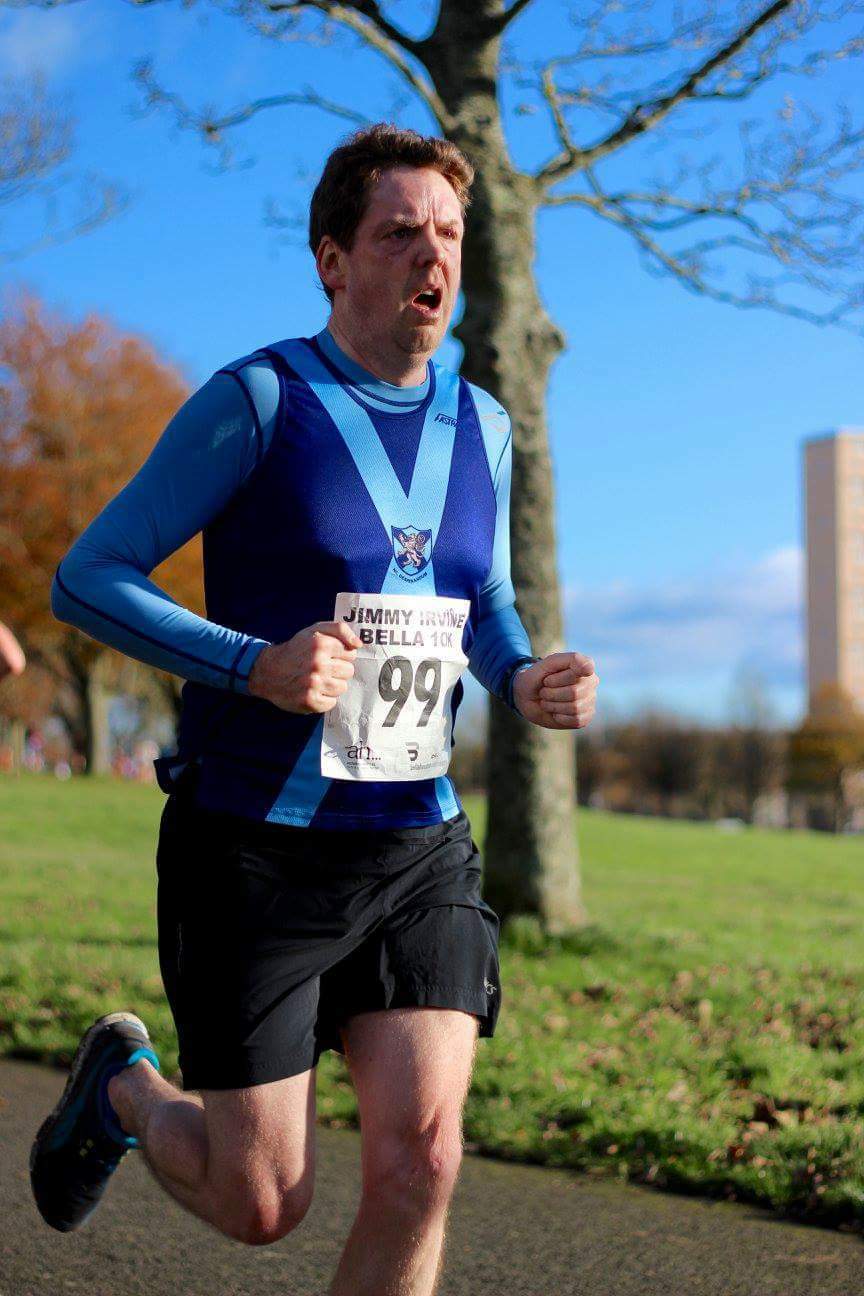 "I’ve been a member of Bellahouston Harriers since 2013, and a member of the coaching team for the last three years. I enjoy taking part in races over most distances, from shorter time trials to longer distances up to marathons. I was fortunate enough to run the Toronto Waterfront Marathon for my 50th birthday. I’m also a big fan of the Scottish cross country season.

My favourite races of the calendar, however, are being part of the Pacer team for the Men’s 10k and the Great Scottish Run. It is incredibly rewarding to help others achieve their race goals at big events like these. On a smaller scale, being part of the coaching team at the Harriers provides similar ongoing rewards in organising sessions to help improve other athletes.

Away from running, I love spending time with my family and friends, I’m a big football fan and also love scuba diving, which I have been fortunate enough to have experienced in the UK, many European countries, and in Egypt."

"I have been a member of Bellahouston Harriers for a decade. I joined to improve my running and to keep myself fit. I enjoy going to races and take enjoyment from club members improving and enjoying themselves with like minded people.

The club requires people to take coaching qualifications to ensure that it is able to provide members with a service and to meet the requirements of Scottish athletics. I became a coaching assistant 3 years ago and if available I am happy to help with coaching or to train with other group members.

In my time in Bellahouston Harriers it has been characterised by a growing membership who compete regularly. Our best athletes have improved on the times of 10 years ago.

I have retired from full time work and like to travel. If I am at home I try to get to the club as often as I can.

I have met many friends during my time at Bellahouston Harriers and I like being a member."

"I took up running in April 2000 from a “standing start”, and ran on my own for a couple of years before joining the Glasgow Women’s Running Network.  I thought running clubs were just for the young and athletic, so I made the mistake of not joining Bellahouston Harriers until 2013.   My running improved immediately, and I discovered that even in my sixties, the right training regime and running technique could improve my efficiency and help to prevent injury.  The other benefits, of course, are friendships, travelling to new parts of Scotland, competing with your peers, the Quiz, and lots more fun than I thought I would have in retirement!

Since then, I have taken part in numerous events, Cross-country, relay-team events, small races in beautiful locations from Tiree to Bamburgh, Killin, Killearn, or Kilmaurs (don’t mix them up!) and big events like the Great Scottish and the sadly missed Glasgow Women’s 10K.  I am very proud of my Scottish Athletics medals, even though I really got most of them for turning up on the day and getting the race done!

Currently I am one of the helpers for the “twenty-sixers”.  Our group mostly consists of people who are new to running, returning from injury, or just getting older.  I decided to train as a Jog Leader to assist with finding routes, encouraging people who are struggling, helping with warm-up and stretching, and doing anything else needed to keep members motivated and enjoying their running.

I am a retired Biology teacher, I enjoy sewing (especially patchwork and quilting), watching wildlife, baking, playing the flute, and sailing on traditional boats in the Western Isles, once a year.  I’ve lived on the South Side for a long time with my husband and the cat, and my three children are all nearby." 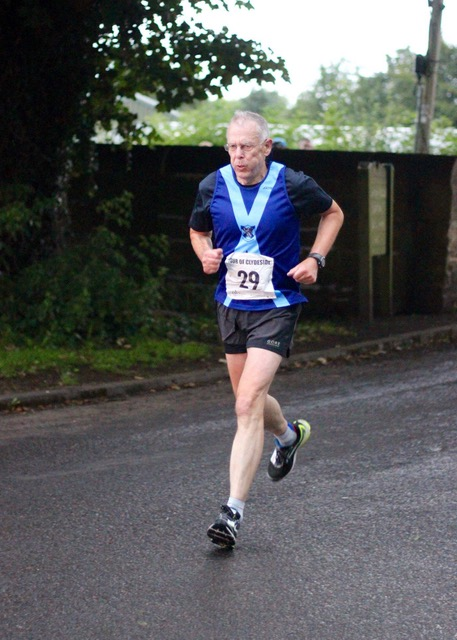 "Whereas most athletes start their running as school children or teenagers, I was 60 years old before discovering the enjoyment of running. The camaraderie and friendship of being part of a wider community, the support and friendship of fellow runners and the numerous race options; cross-country, track indoor and outdoor, trails or roads still allows me to compete.

My role as a Jog Leader, gives me the opportunity to lead and encourage new and returning runners back into athletics.

Like most runners when travelling, I pack my running shoes. The joy of running around a new city either in the UK or abroad is always an occasion to savour. Though I race less frequently I am regular Park Runner, and still enjoy the competing in local and club races."