Greg Templeton reflects on a successful evening at the Scottish 10,000 metres championships... Photos by Bobby Gavin. 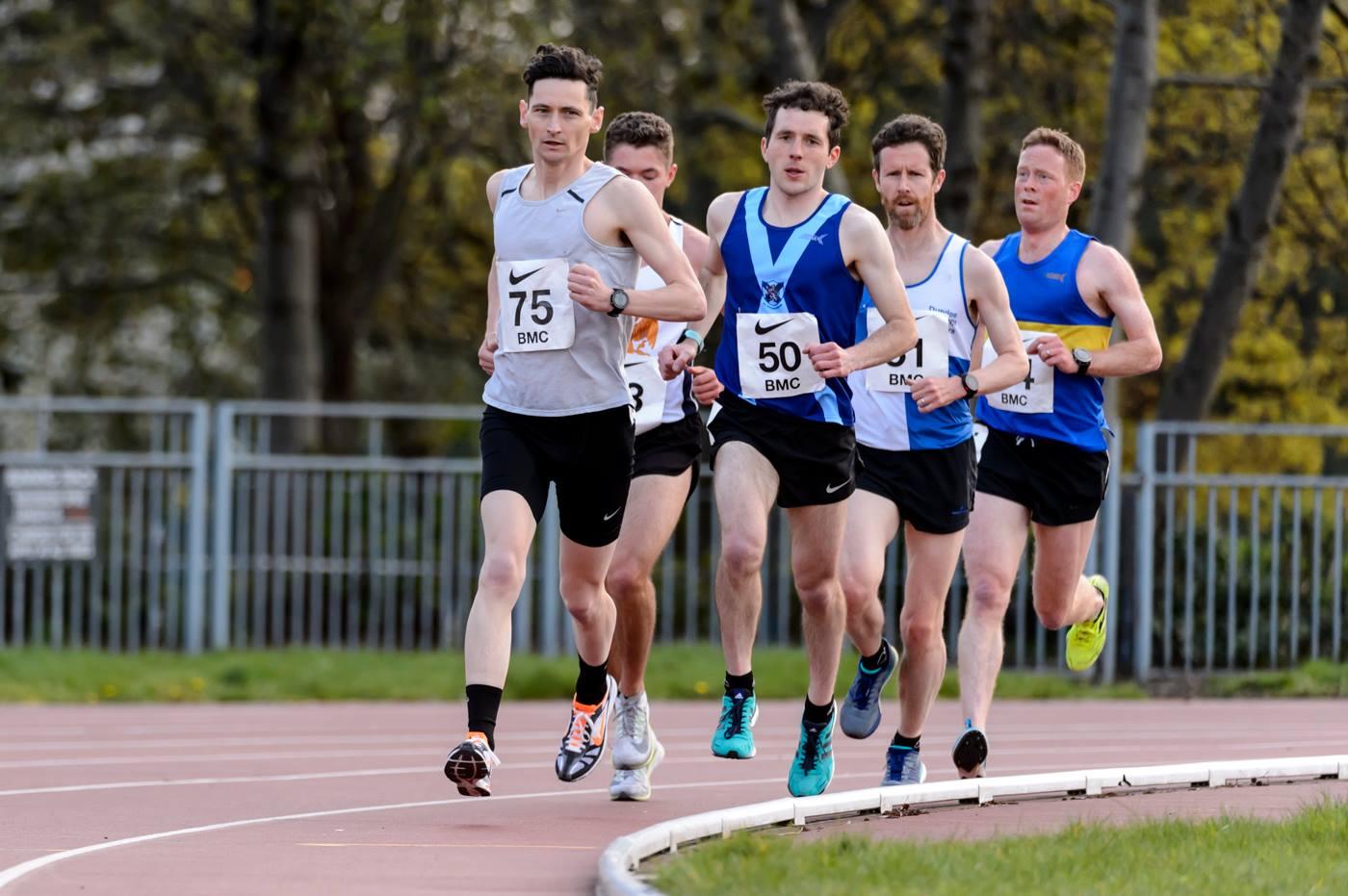 Track racing is a different beast to road racing, it offers no retreat, no escaping place and this I knew of too well. Having not raced on the track for over seven years I found myself eager to test myself once again - this time over 10,000 metres, noticeably longer than I was used to on the track.

I was joined by our very own Darren “Dazzler” McQuade. Unfortunately, we were placed in separate heats. I was hoping we could race together and push one another on to fast times. More importantly we wanted to have bragging rights.

Blessed by blue skies and glorious weather it was nights like this that the hours of training in the rain are made for. Several Harriers were in attendance giving shouts of encouragement which was very welcoming, although I only started to notice them on my final few laps.

As my race was about to begin, the official told us all to enjoy the race. I turned to my fellow athlete on my right... “aye that will be right- that was a tad sarcastic”!!

My goal, to get under 34 minutes. I only raced one 10k last year, however this being my first of the year I wanted to start strong.

The race was paced by Inverclyde athlete John Sharp for 20 laps. He paced us like a dynamo, taking us through 5k in 17.05, which meant running a negative split to get under 34 minutes. Game on.

The last five laps got harder, running at the same intensity but the effort was more evident now. Two laps to go and I knew if I could hold pace, put one foot in front of the other I should get under. One lap to go and I had to scream at myself to start to drive for home. 200 metres to go, give it everything you have got.

33.55.08 officially in third place and as I crossed the line I pumped my arms in celebration!

Darren was off next, being paced by Mark Pollard of Inverclyde who was aiming to bring the athletes home in 33.30.

Darren worked well in a hotly contested race. A stacked field of strong athletes to chase and, being a furiously competitive athlete, he ran well in that environment. Looking comfortable throughout, Darren worked his way through the field in the later stages where others began to tire. Finishing in 33.43.01 in tenth place. A great run from Darren and a PB too, having asked me afterwards “did I look like I was struggling?”. Never in doubt Dazza.

The battle of the 10,000 and bragging rights went to McQuade, not by much, had we raced together it may have been a different story. Nonetheless we both ran a PB and were both delighted. On behalf of myself and Darren having our fellow Bellahouston Harriers there made all the difference.

Lastly the final race kicked off. Adam Craig pacing Lachlan Oates to a PB in 29.40.79, who looked incredibly strong throughout. Incredible running with ten of the eleven athletes under 31 minutes.

A great event put on by GAA and I look forward to future events for sure.

I have the track bug once again. The track is not as daunting as you may expect. Many stadiums offer open graded events where you can try distances from 800m up to 3,000 metres. From my experience it is a great way to improve your times up over the distances and the track has an added edge you do not get anywhere else.

Full event listings can be found on the Scottish Athletics website under the events section, with events normally every month up until September.

Mark Wallace is hoping to run track sessions on Saturday mornings at Nethercraigs, a great way to get quicker on the road or track.